Today is a big day at Spirit Energy.

Most importantly we are celebrating with a big cake, but we have also taken time to review some of the milestones reached within the last 10 years, both at Spirit and within the wider community, focusing on cleaner air, climate change mitigation and sustainable fuel supply.

Over 10 years Spirit has grown into a company employing around 25 people with a passion for renewable energy. With all of the cuts to the Feed-in Tariff, the first few years were a bumpy ride, but we now have a thriving business with five installation teams and two installations depots, one in London and one in Reading. We are recognised as experts in the installation of solar PV, energy storage systems and electric car charging equipment.

The makeup of Britain’s electricity supply has changed dramatically over the last decade. In 2010, renewables contributed just 4% of our total demand; by 2019, this had increased to 32%.

As you can see this has made our electricity supply much more diverse: 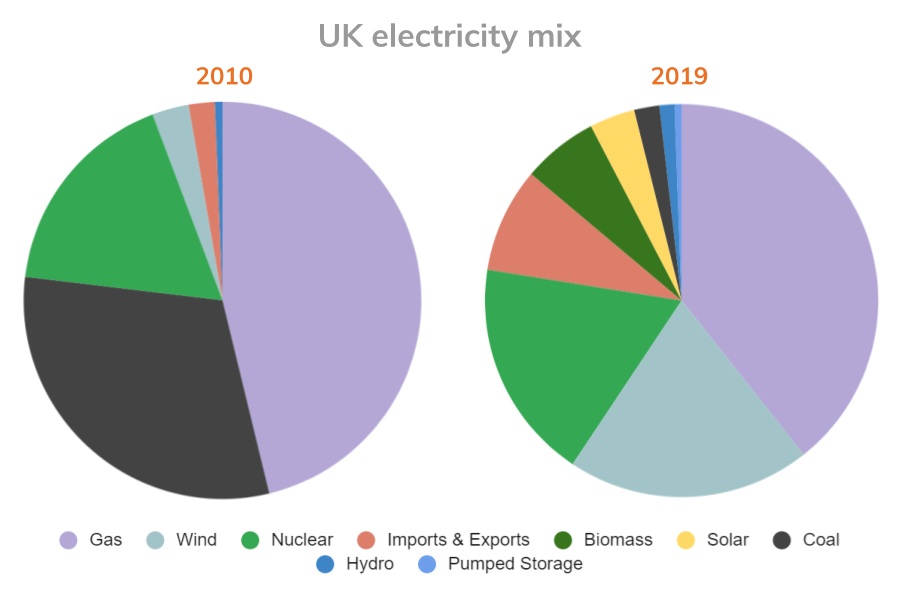 Coal is close to being phased out, replaced by a surge in renewables like wind, solar and biomass. As we come to rely on many intermittent sources, diversity becomes a strength, but we will need a lot more investment (particularly in energy storage) to transition to a stable decarbonised grid.

Note that total electricity consumption has actually fallen by 14%, most likely due to efficiency improvements. But it's expected to increase as we electrify transport and heating (heat pumps or hydrogen produced via electricity).

By August 2018, global wind and solar PV installations reached a trillion watts, for the first time. While this milestone took the industry 40 years, the second trillion watts are expected to be installed in five years, in 2023. With the supply variability inherent in renewables, the need to co-invest in storage is becoming increasingly important. 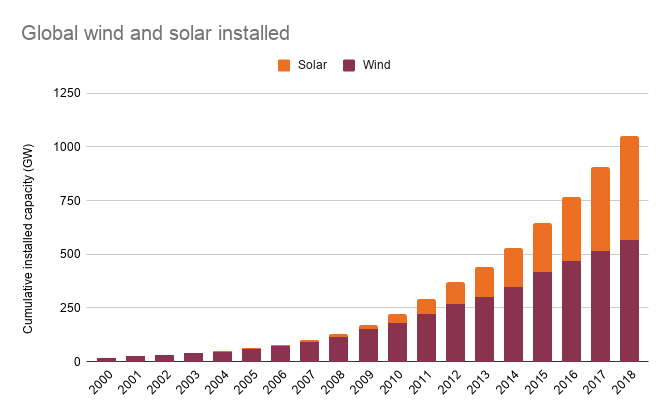 Data source: Our World in Data.

The investment costs required to install the second trillion watts are expected to be around half of the cost of the first trillion watts. In the solar market in particular, technology costs have fallen dramatically whilst solar cell efficiency has increased by around 25% or so.

When installed at scale under the right conditions, solar is now the lowest cost power generation technology. For example, in 2017 Saudi Arabia tendered for solar power capacity and the winning bid was to supply power at a rate of 2.34 US cents per kWh. Under optimal conditions and at utility scale, just north of 2 cents per kWh is all solar costs.

Since Spirit started in January 2010, the UK has had four General Elections and four different Prime Ministers. The government narrative around the environment and clean energy has swung from positive under Gordon Brown with the introduction of the Feed-in Tariff scheme in April 2010, to lukewarm at best under David Cameron (‘cut the green crap’ being the phrase most associated with the latter days of his government). That said, in November 2015, Amber Rudd did announce the phasing out of the UK’s remaining coal-fired power stations.

More recently there have been some positive signs, particularly on dealing with air pollution. New sales of petrol and diesel cars are due to be halted after 2040, with the potential to bring this date forward. Investments in electric vehicle infrastructure was the defining environmental pledge in the Conservative’s election campaign. Low emission zones are expanding in London and other cities to improve deadly urban air quality.

In addition in November 2019, the government halted fracking and warned shale gas companies that it would not support future fracking projects. The UK led the way last year by declaring a climate emergency and enshrining a net zero pledge into law. Whether we will follow these landmark words with meaningful actions remains to be seen...

A decade of global protests has erupted into the climate action movement, with thousands galvanised by groups like Fridays for Future and Extinction Rebellion. Frustrated at the lack of worldwide effort to halt emissions in the face of environmental devastation, people have taken to the streets to demand change. With awareness growing and pressure mounting, politicians and big businesses are running out of places to hide in the make-or-break decade ahead.

On paper, one of the most significant moments was the signing of the Paris Agreement, reached on 12th December 2015. The Agreement came into force on 4th November 2016.

The Paris Agreement’s central aim is to strengthen the global response to the threat of climate change by keeping a global temperature rise this century well below 2 degrees Celsius above pre-industrial levels and to pursue efforts to limit the temperature increase even further to 1.5 degrees Celsius. Additionally, the agreement aims to increase the ability of countries to deal with the impacts of climate change, and at making finance flows consistent with a low GHG emissions and climate-resilient pathway.

To this date, 187 of 197 Parties to the Convention have ratified the Agreement. That said, in November 2019 Donald Trump began the process of formally withdrawing the US. To set against this, China and France have signed a pact committing to the irreversibility of the agreement, and in practice one of the most important commitments to sustainability has come from China.

China is the world’s most populous country and the largest emitter of carbon. As the world’s manufacturing hub, it is in a unique position to change the course of global emissions. In the last decade, the signs have been pretty good. After suffering severe smog in 2011, the product of years of rising coal consumption, the Chinese government initiated a massive national action plan: halting the growth of coal consumption, improving air quality and helping the country limit emissions overall.

Quite a decade when all is said and done…

In fact what is clear is that we are in the middle of an energy revolution, or at least a major period of evolution in how the world sources, manages and distributes energy.

The next 10 years will be absolutely critical in the fight for cleaner air, reduced emissions, containment of man-made climate change, and the drive to live sustainably on the only planet we have.

We will aim to play our part as best we can, with a renewed commitment to powering change by designing and installing solar PV, energy storage systems and electric car charging equipment using the best technologies available. Alongside this, we’ll continue to share expertise from the industry to help others on their renewable journey.

Thank you for all your support over the last decade. 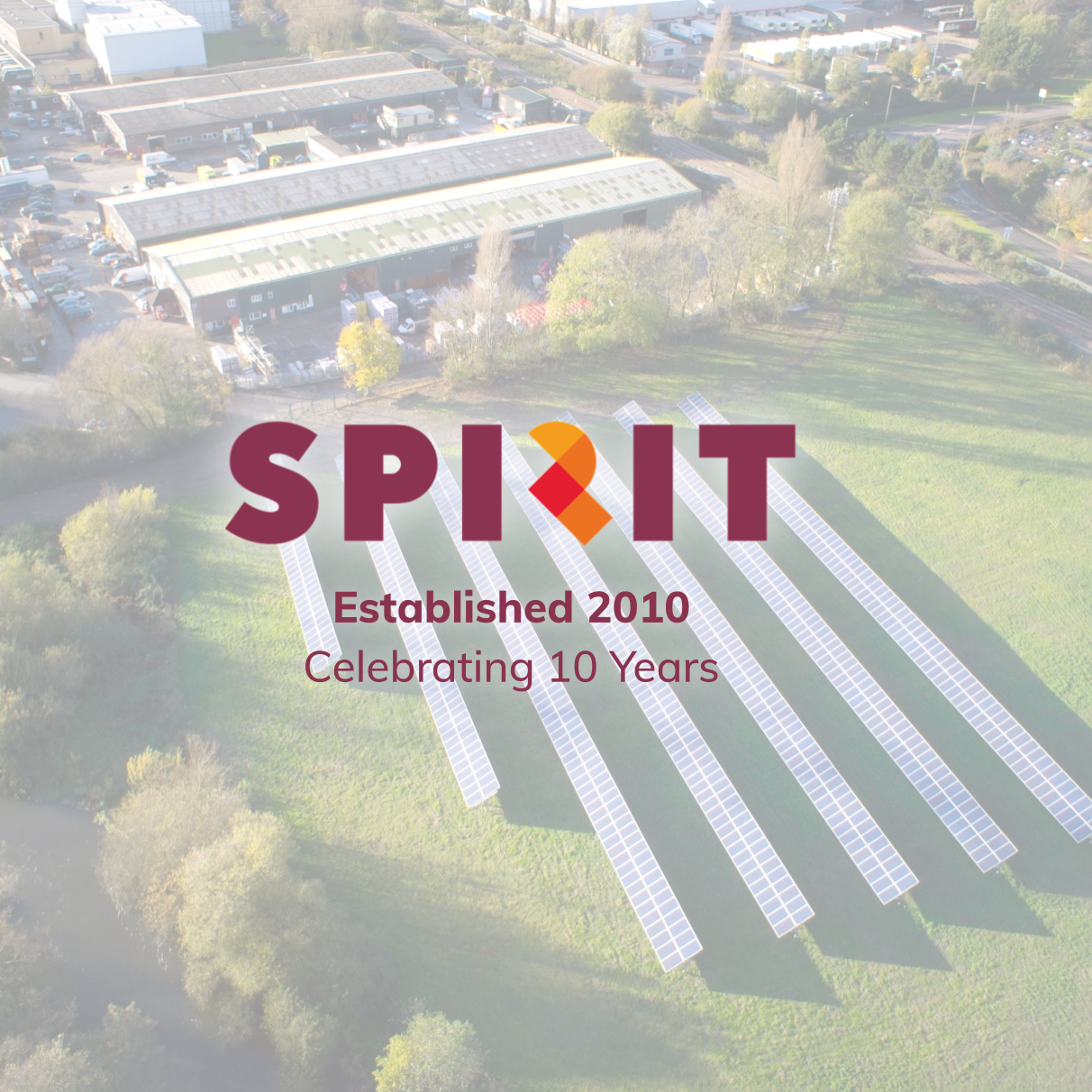