The Carbon Footprint of a Solar Panel

In the wake of the largest climate protests the world has ever seen, we have dug a little deeper in our own backyard to assess the ‘lifetime’ carbon footprint of a solar system...

It’s a real joy to switch on your solar PV system for the first time and to know that electricity is being produced in your home directly from the sun. By watching the meter or the inverter you can see with your own eyes that your roof is no longer merely a shelter from the elements, but a state-of-the-art generator producing energy for you in its most valuable form at no on-going cost to the environment.

It’s a question we are often asked.

Renewable sceptics are quick to point to the energy costs associated with manufacturing and shipping the panels and other components. The implication being that perhaps solar isn’t quite as green as many of us would like to believe.

So we have gone out and searched for a solar carbon footprint calculator.

The most rigorous and scientifically accepted method to calculate a product’s environmental impact is known as a life cycle assessment, which looks at not only the carbon emissions throughout the product’s entire lifetime (including disposal/recycling) but also things like energy used in raw material production and in the manufacturing process.

Unsurprisingly, there is a plethora of data available comparing the carbon emissions of various sources of energy, but interestingly the studies by major organizations are a bit dated.

The best source we have found comes from the Intergovernmental Panel on Climate Change (IPCC). In 2014, the IPCC published their fifth assessment report (the next one is due in 2021) and in it there is a table summarising the carbon emissions of various electricity-generating technologies. The table lists the CO2 production per kWh of electricity generated by the technology, taking into account the whole ‘life cycle’ of the technology:

There are no big shocks, except perhaps that nuclear power is very low on the list considering critics often cite the huge amounts of concrete required to construct the power plants, the production of which might be expected to generate a reasonable amount of CO2. Obviously it’s not clear whether the nuclear figure allows for the environmental impact of building three massive tunnels under the Bristol Channel, as required by Hinkley Point C...

Carbon Capture and Storage (CCS) significantly reduces the CO2 emissions from coal, but even with CCS, coal never gets anywhere near as clean and green as renewables and nuclear. (CCS involves storing waste CO2 from a process and eventually depositing it in something like a depleted gas reservoir where it will not contribute to climate change.)

The decision to shut down all of our coal fired power stations by 2025 looks justified.

Concentrating solar power helps, both with utility scale solar thermal power (where water is heated to produce steam to drive a turbine) and with solar PV (e.g. using mirrors).

Looking at this table it might be easy to discard solar PV and look at other renewable technologies for the solution to climate change; however, one key advantage that solar PV has above all the others below it is that it is very cost-effective and efficient at small scale. None of the others lend themselves as well to small-scale generation due to loss of economies of scale and/or inefficiencies at small scale. Also, rooftop solar does not require additional land, is almost completely silent (the noisy bits can be hidden away) and does not interfere with the local ecosystem.

Will the solar PV carbon footprint reduce over time?

Without knowing the exact assumptions that went into the IPCC analysis, it’s a little difficult to know at what rate the lifetime footprint of solar PV is set to reduce. Indeed it has almost certainly already reduced since the 2014 analysis. The following will have helped:

Backing up the IPCC data

It is always good to look for a second source of data. Another source comes from NREL, the National Renewable Energy Laboratory of the USA. Its paper from 2012 gives results largely similar to the ones above and they state that the irradiation values used ranged from 900-2,200 kWh/m2/year. We get about 1,000 kWh/m2/year here so it’s safe to assume the UK’s climate is well represented. 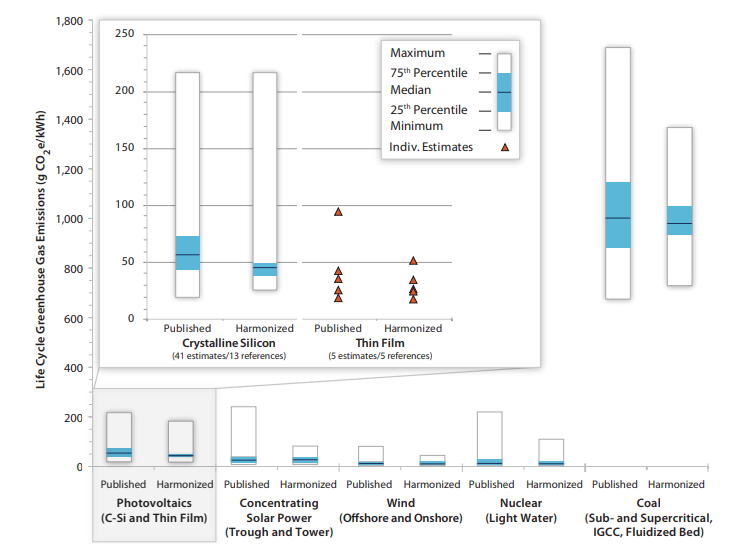 And it’s reasonable to assume that the carbon footprint of solar PV will reduce as the technology develops. Particularly now that battery storage is increasingly being thrown into the mix…

The best way to reduce the carbon footprint caused by electricity generation is to use less electricity in the first place. But the second best is to find a low impact fuel  Solar is not the best, but it is up there as one of the best, and it should definitely be in the mix.