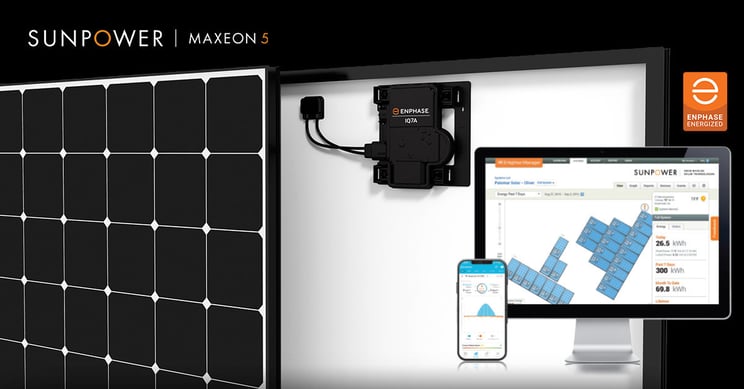 A few years ago, SunPower struck a deal with Enphase. Part of this involved an agreement for SunPower, known for its high-efficiency solar modules, to integrate Enphase’s market-leading micro-inverters. We are now seeing the result of the collaboration coming to fruition with the release of the Maxeon 5, an AC solar panel touted by the company as the ‘most powerful’ domestic module available.

What is an AC solar panel?

The Maxeon 5 is a SunPower solar panel with an integrated Enphase micro-inverter.

SunPower expects the module to deliver up to 50% more energy than a conventional panel over its 25 year lifetime in real world conditions, such as partial shading and high temperatures. The Maxeon 5 panels are set to be pretty expensive, but we estimate they could be around 15% cheaper than similar SunPower panels with SolarEdge optimisation.

What does the Maxeon 5 warranty cover?

The key aspects of the warranty are:

SunPower expects your panels to last - it boasts a 0.005% return rate.

Micro-inverters vs other types of inverter

A standard solar PV system uses a string inverter: the panels are connected in series, sending DC power down from the rooftop into a single inverter, which converts the power into AC. The inverter handles the Maximum Power Point Tracking (MPPT), adjusting the load to maximise power generation across the string of panels.

Micro-inverters are, as the name suggests, small inverters that are placed on the roof, one connected to each panel. Each one converts the DC to AC power from that panel before they are connected up in parallel and the power is sent down into the home. MPPT is handled by each micro-inverter, meaning the generation is maximised for each individual module.

Pros and cons of an AC solar module system

Are AC panels the future?

At the moment, AC solar panels are significantly more expensive than their DC counterparts. If the rooftop is subject to unavoidable shading, or the system is split over multiple orientations, then we would recommend some kind of optimisation, be that SolarEdge or micro-inverters. In our experience, we’ve found SolarEdge to be more reliable and affordable.

So while it’s exciting that solar manufacturers are developing new types of modules - and SunPower and Enphase are the best in their industries - AC panels probably won’t be replacing traditional systems in the near future.

Keep up to date with all the latest breakthroughs in solar PV by subscribing to our newsletter: