Are Premium Solar Inverters Worth It? 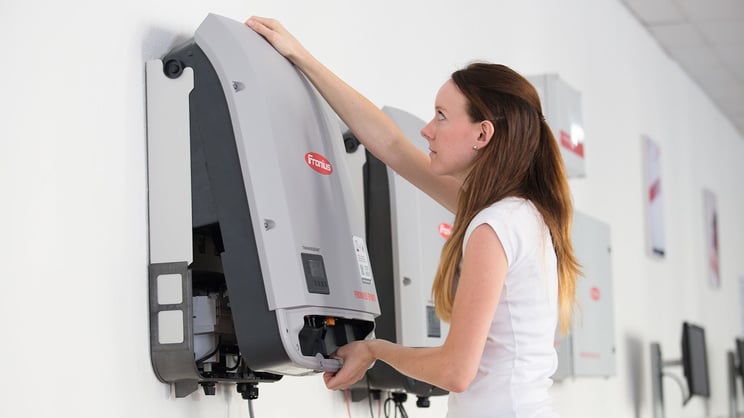 It’s something of a solar industry cliche, but the inverter really is the heart of a photovoltaic system. While solar panels harness the sun’s energy, it’s the inverter that converts this direct current (DC) into usable alternating current (AC) electricity. Yet, compared to the panels, inverters rarely get much discussion.

So, to give them their due, we’re going to focus on the best PV inverters and investigate whether premium solar inverters are worthwhile. We’ve started by breaking down the factors to look out for in the top tier brands:

Most inverters are very efficient, around 95-98% (a small amount of energy is always needed to power the DC-AC conversion). When it comes to premium inverters, you would expect their efficiency to be at the upper end of this range.

The average lifespan of an inverter is about 12-14 years, so it will need to be replaced at least once during the solar array’s 25+ year lifetime. In accordance with this, the standard inverter warranty is around 5 years, though often an extension to 10 years is available. If the basic warranty offered is longer, this is usually a good sign. SolarEdge is notable for providing a standard warranty of 12 years, extendable to 25 years.

A few inverters will always fail during their anticipated lifespan. It can be difficult to find the expected fail rate for a given inverter brand (though it’s a good sign if the manufacturer does publish this), but on average 0.2-0.6% of installed inverters fail each year. Often this is down to poor specification or installation conditions, however, so an experienced installer can reduce the chance of failure.

SMA, for instance, reports that its 2008 SunnyBoy inverters exhibited a failure rate of 0.15-0.22% over four years, which is at the low end of the industry spectrum.

How much more do premium inverters cost?

A premium inverter, such as those made by SMA or Fronius, can set you back about twice as much as a basic inverter. For a typical domestic installation, this could mean an inverter cost of approximately £650 compared to about £300, which isn’t a huge difference relative to the average overall system price of around £6,500.

SolarEdge, on the other hand, is more than just an inverter - it’s a power optimiser. This means it’s great for getting the most out of a system where some of the modules may be shaded during parts of the day, but it does add 10-15% to the overall project cost.

Our go-to premium inverters are those made by Fronius and SMA. Where shading may be an issue, we often recommend SolarEdge.

Tesla has also recently unveiled its own solar inverter. While details are relatively thin on the ground and the product is only available in the USA, going by the company’s previous offerings, we can expect it to be premium. The American specs include two sizes (3.8kW and 7.6kW), with the larger having a generous 4 MPPTs. The inverter has a substantial 12.5 year warranty, 97.5% efficiency and should integrate well with Tesla’s Powerwall battery.

So are premium inverters worth it?

When it comes to string inverters, premium brands like Fronius and SMA are generally better made than cheaper products, and so in theory more reliable. In terms of standard warranties and efficiencies, however, the differences can be marginal. Saying that, we do find their tech support and their monitoring platforms are much better.

Fronius inverters also have a wide input range of voltage and current, which helps with designing for roofs which have panels facing different directions. If you experience intermittent or partial shading, it’s worth considering SolarEdge to maximise the possible output.

For a personalised quote or help designing your system, please give us a ring on 0118 951 4490. To learn more about inverters and PV, please visit our solar knowledge bank: