One of the most common misunderstandings surrounding flat roof solar installations concerns the panel mounting angles - the slope relative to the horizontal and the orientation relative to south.

In the UK, solar panels produce most power when mounted at between 30 and 40 degrees to the horizontal, facing due south. It is therefore natural to assume that this is the best angle to tilt them at for flat roof installations. But this is not usually the case, as there are other factors that come into play with flat roof mounting:

The main considerations when choosing panel slope are as follows:

Mounting the panels below 30 degrees helps to minimise wind uplift and roof loading, and maximise the number of panels for a given roof space. 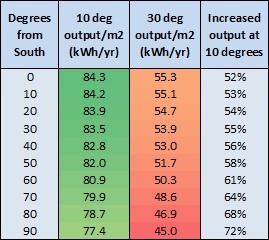 As the table shows, once the spacing required between rows is taken into account, panels mounted at 10 degrees will yield between 52% and 72% more power per unit area of roof space.

As well as the slope of each panel, the other consideration for flat roof solar systems is the orientation - which way should the panels face?

As mentioned above, solar panels installed in the UK will produce most power when angled between 30 and 40 degrees and facing due south. But what if your roof doesn't face due south? Should the panels be rotated to face south anyway? Or what about an east/west configuration?

As with a pitched roof installation, solar panels on a flat roof can be orientated as much as 90 degrees off south, to face directly east or west, and still be worthwhile considering in terms of output performance.

It is usually best to orientate the panels in line with the footprint of the building in order to achieve the optimum number of panels within the roof area. There is little benefit in rotating the array to face due south as this leaves dead space that could otherwise be used to fit more panels. See pictures below. 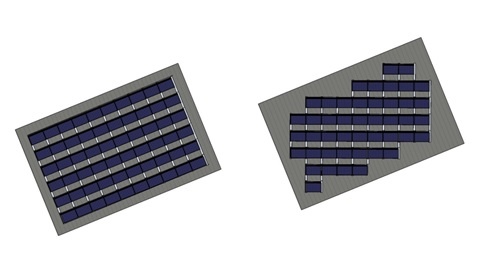 In line with roof vs due south panel layouts for flat roof.

In the above example we can get 30% more panels by installing in line with the roof footprint (allowing for suitable edge distances). This contrasts with just a 0.5% drop in output due to the less favourable orientation (20 degrees off south).

It is worth highlighting that at a 10 degree pitch, the difference in output between panels mounted due south and panels mounted east or west is much lower than it is for a system pitched at 30 degrees - see table above.

For buildings with footprints aligned roughly south, another mounting option to consider is an east/west configured system. These use the same A-frames, tilted at 10 degrees, as with the south-facing systems, but set back to back so that the panels are orientated at 180 degrees from each other (due east and west ideally). 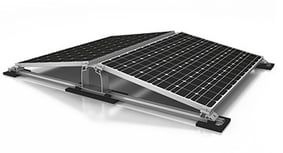 East/West systems maximise the power output (number of panels) per square meter of roof, since no spaces are required between rows. The lower performance of the individual panels due to the less favourable orientation is therefore offset by the extra capacity. On a per unit area basis, a 10 degree east/west system outperforms a 10 degree south-facing system by up to ~25%.

On top of the performance benefits, east/west systems also require lower ballast. However, because of the reduced performance on the individual panel level, east/west systems are more expensive per kWh than south-facing systems. Despite this, providing the building footprint can accommodate an orientation as close to east-west as possible, an east/west mounting system is usually preferable for the other reasons outlined above.

The other consideration when installing flat roof solar, particularly on a new build, is which type of fixing system to use.

In most situations, a free-standing ballasted mounting frame is preferable. Using a free-standing mounting system weighed down with ballast avoids the need to penetrate the roof surface. This helps to minimise the risk of roof leakage, and ensures that any warranties on the watertightness of the roof aren’t compromised – particularly important if the roof is brand new.

With ballasted systems, the solar mounting frames rest on special rubber footings to help spread the load. The ballast itself comes in many forms, and preference may vary from installer to installer. At Spirit we use preformed concrete ballast as it looks neat and tidy and will stand the test of time.

In some cases, however, ballasting isn’t a viable option; for example, if the roof cannot take the weight of the ballast, or where the ballast requirement is so high (e.g. tall buildings) that there is not enough space under the panels to fit it all! There may be no choice but to fix directly to the structure of the roof. This is more complicated than using ballast as input from the roofing manufacturer is usually required to ensure that the fixings are adequately sealed against water ingress. There are systems available but they usually require a new roof covering and they can be quite expensive.

The choice of fixing will depend on the roof system manufacturer - they often have their own specialist fixing (as with for example Bauder roofs). Other universal fixings exist; please get in touch for more information.

If you have a project in mind, we can compare systems at different orientations to ensure the best system is specified from the outset. Please call us on 0118 951 4490,  email commercial@spiritenergy.co.uk with project details, or request a free quote: