Can You Go Off-Grid with Solar PV? 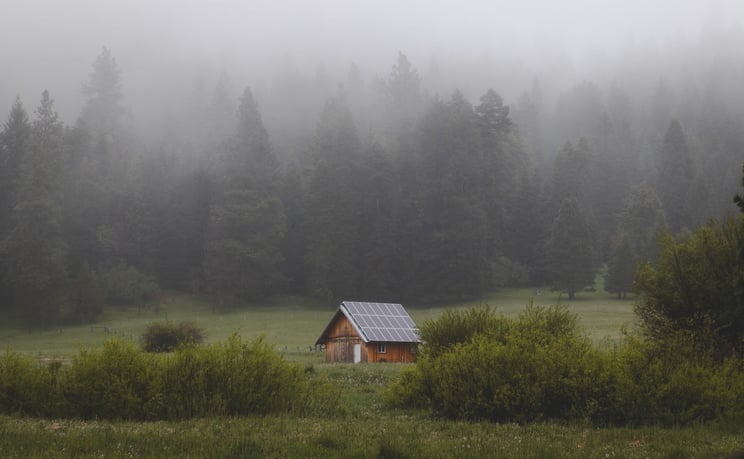 With energy prices rising, we often get clients asking if they can go off-grid with solar PV. It’s an alluring idea, especially since affordable battery storage has brought greater grid independence within reach. But living entirely on solar power is not so simple.

In this blog, we’ll investigate how to go off the grid with solar panels and assess, crucially, if or when it’s worthwhile.

What does off-grid mean?

How much energy does an average property use?

Our houses demand energy for lots of things, from constantly running fridges to evening television. Most properties follow a typical daily pattern: 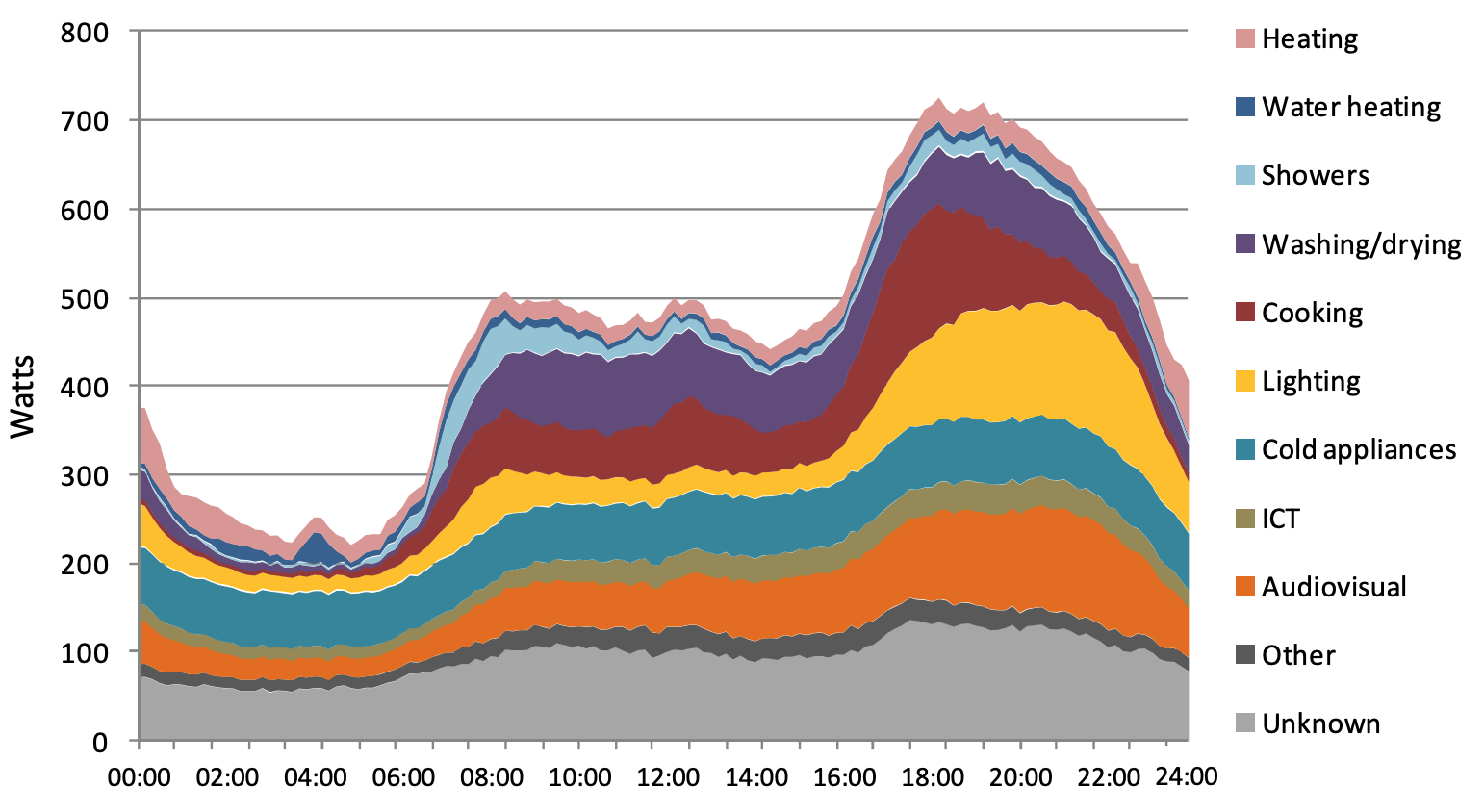 Of course, the specific demand will vary greatly depending on the size and energy efficiency of the building, number of occupants, types of devices and appliances in use etc. Below are the average household electricity consumption for UK properties, excluding electricity used for space heating:

If you were building an off-grid house, in all likelihood it would be detached, so let’s start with an annual electricity usage of 4,150kWh.

Next, let’s add the heating. As this off-grid house is not connected to the gas network, we need to use electric heating - a heat pump being the most efficient type. The average home requires 12,000kWh of heating per year. Since heat pumps draw energy from the ambient surroundings (air or ground), they can be about 300% efficient, meaning we would need 4,000kWh each year to run one.

This brings the house’s total energy demand to 8,150kWh per year. (This is before factoring in anything fancy like charging an EV, which could add an extra 2,800kWh annually.)

To generate 8,150kWh p/a, you would need approximately 9.3kWp of solar PV. This is about 30 panels, which would take up around 49m2 of roof space and cost about £20,000. Maybe that doesn’t sound so bad… but solar power needs to be used at the moment of generation, making time of day (and indeed time of year) extremely important.

How does energy demand throughout the year correlate with solar generation?

For a regular installation, we try to size the PV system so that its annual output is close to the property’s annual electricity demand. But on a monthly basis, most homes use more energy in the winter, when solar generation is lowest: 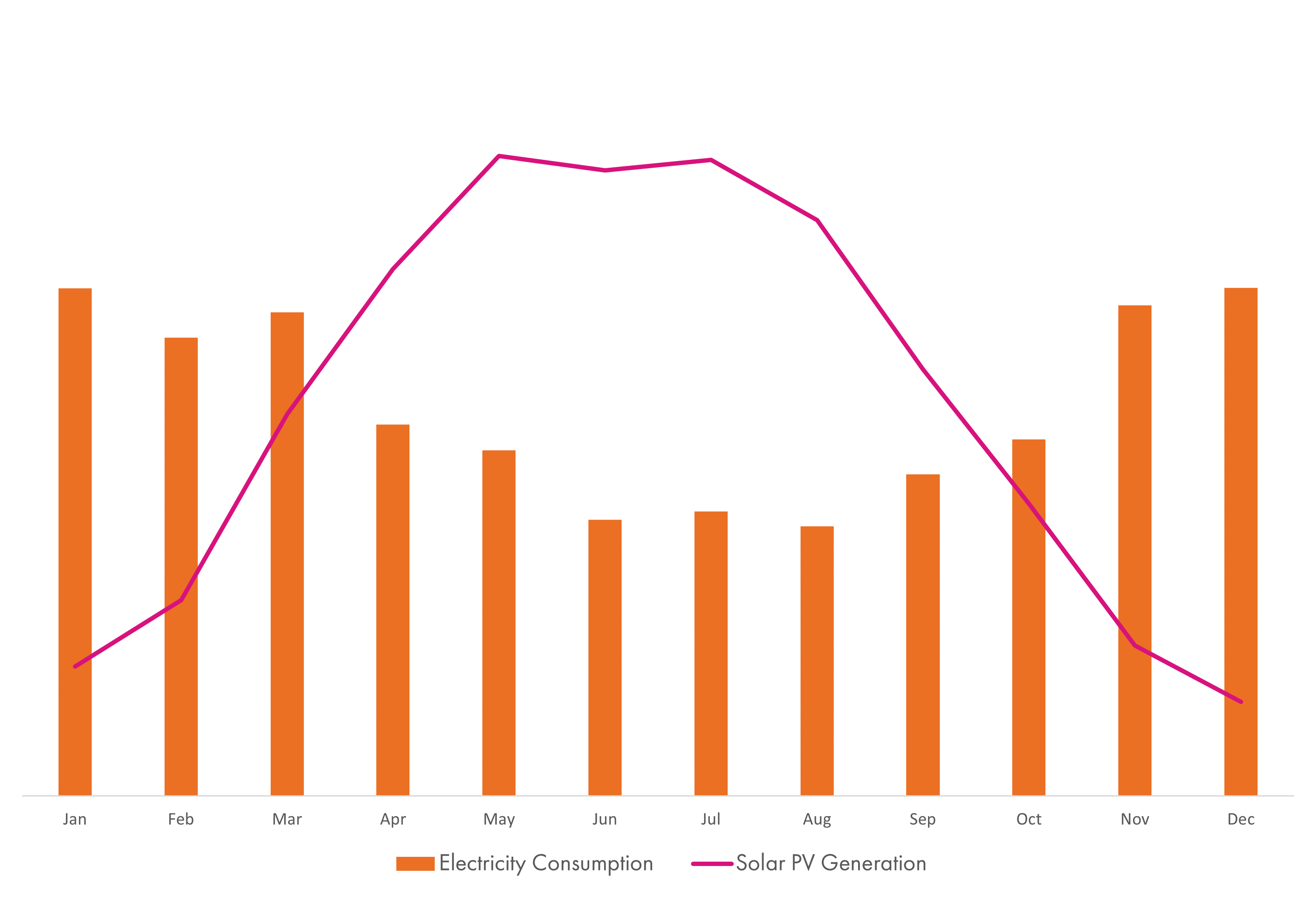 This is due to shorter days, more time spent inside etc.

Once you add a heat pump on top of this, demand vastly exceeds solar generation in winter months: 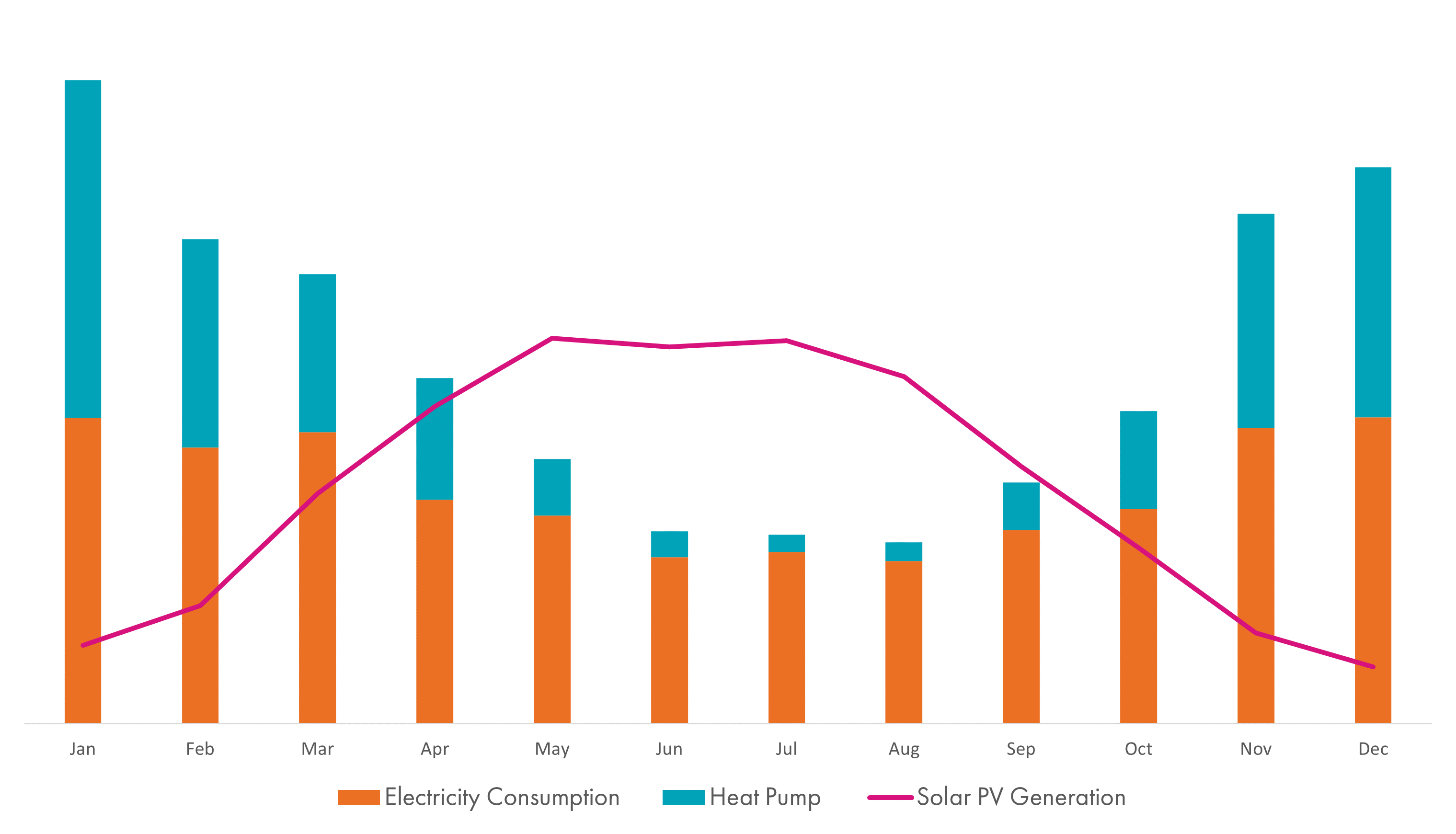 Of course, you also need to consider usage on a daily and hourly basis. Without a battery, solar power must be used when it’s generated (i.e. the daytime), so it won’t keep the lights on in the evening.

The impact of battery storage

We’ve modelled a home with annual electricity demand of 8,150kWh and standard load profile, with a 10kWp solar system and 15kWh battery.

On a typical summer day, this is sufficient to meet the home’s demand:

But on a typical winter day, the home’s load cannot be met by solar and battery power until gone 8AM or after 8PM:

Some days will be worse than others for solar generation, making it very difficult to have a reliable completely off-grid solar power source.

You’d have to double the size of the PV and battery system to almost cover a typical winter day, with significant wastage of solar power in summer.

What you would need to go off-grid?

To go off-grid with just solar PV, you would either need to massively oversize your solar array and battery system, or live with regular power outages, particularly in the colder months.

Realistically, you would need to supplement solar with a secondary power source in the form of a generator (probably diesel). You could also opt for a wood burning stove or biomass boiler instead of/in addition to a heat pump.

To illustrate how much a generator would need to be used, we modelled a property using 5,000kWh a year, with max instantaneous demand of 10kW, and three different sizes of solar and battery systems:

As you can see, to avoid using a generator would require six times the PV and nine times the battery capacity. More staggering is that 80% of the potential solar power generation would be lost because of all the oversized solar capacity becoming redundant in summer.

Is it worth it?

Going off-grid is possible, but is it worth it? The bottom line is that it will be very expensive (at least £50,000 for a substantial solar system and a couple of batteries). If you’re considering it out of necessity, because the property has no grid connection, then you’ll have to compare this cost with that of connecting to the national grid.

If you’re interested in living off-grid for other reasons, then you may need to question those reasons. Severing a grid connection will not make your lifestyle more environmentally friendly, as you will have to invest in oversized renewable resources (with substantial wastage in summer) and/or a polluting, fossil fuel generator. While connected to the national grid, the electricity you draw will come from increasingly clean sources, and any solar power you export will help others to decarbonise.

In short, yes it’s technically possible to go off-grid with solar PV, but it’s almost certainly not worthwhile. You can, however, affordably reduce your reliance on the grid - and so insulate yourself against rising energy costs - by investing in solar and batteries.