Virtual Power Plants: Balancing the Grid with Solar and Batteries 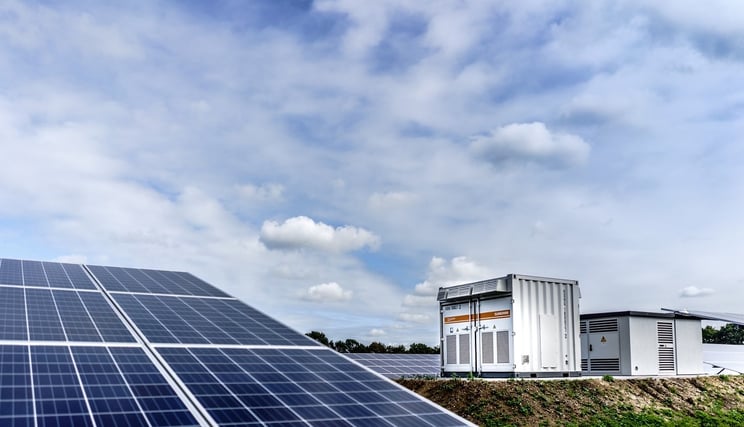 We’re in the midst of an energy revolution. Coal is due to be kicked off the grid by 2024, ending its 142 year reign. Solar and wind capacity has increased by 579% since 2010. The Big Six has been broken.

This rapid transformation of the UK’s electricity grid opens up many possibilities, and challenges. Chief among them is the precarious balance of supply and demand. Intermittent renewable generation, combined with electrified heating and transport, makes this a pressing task.

But can solar, alongside battery storage, be part of the solution? Find out how they can form part of ‘virtual power plants’ - the 21st century answer to the fossil giants of old.

The electricity network is changing

The traditional electricity grid consisted of a small number of large, centralised power stations (usually coal or nuclear). The electricity they generated was carried long distances via transmission and distribution lines to the properties where it was needed.

The decentralised grid that we are in the process of adapting to is much more complex. There are some large power stations (increasingly wind and solar farms replacing gas and coal), and many more distributed generators (rooftop solar, local hydro etc.). The renewable generation is intermittent, so balancing supply and demand is trickier, relying on energy storage, smart metering and demand side management across the system.

Margin pressure on the grid

As the electricity system becomes more complex, we have to rely more on international interconnectors, energy storage and dynamic response.

When margins are tight, the National Grid calls on power plants to fire up at short notice. In this balancing market, generators are paid much more than the market rate - which ultimately leads to higher energy prices for consumers. High energy users also face very high charges for electricity drawn in TRIAD periods.

This winter has seen the tightest margins on the grid in 4 years, with a record number of capacity warnings issued by the grid.

What are virtual power plants?

A virtual power plant (VPP) is a set of decentralised assets working together to smooth out the peaks and troughs in energy demand. These assets include:

Individually, their generation varies too strongly or they are too small to meet the minimum bid size to participate in grid balancing services.

But they can be aggregated in a VPP to allow forecasting, optimising and trading as if they were a single power plant. 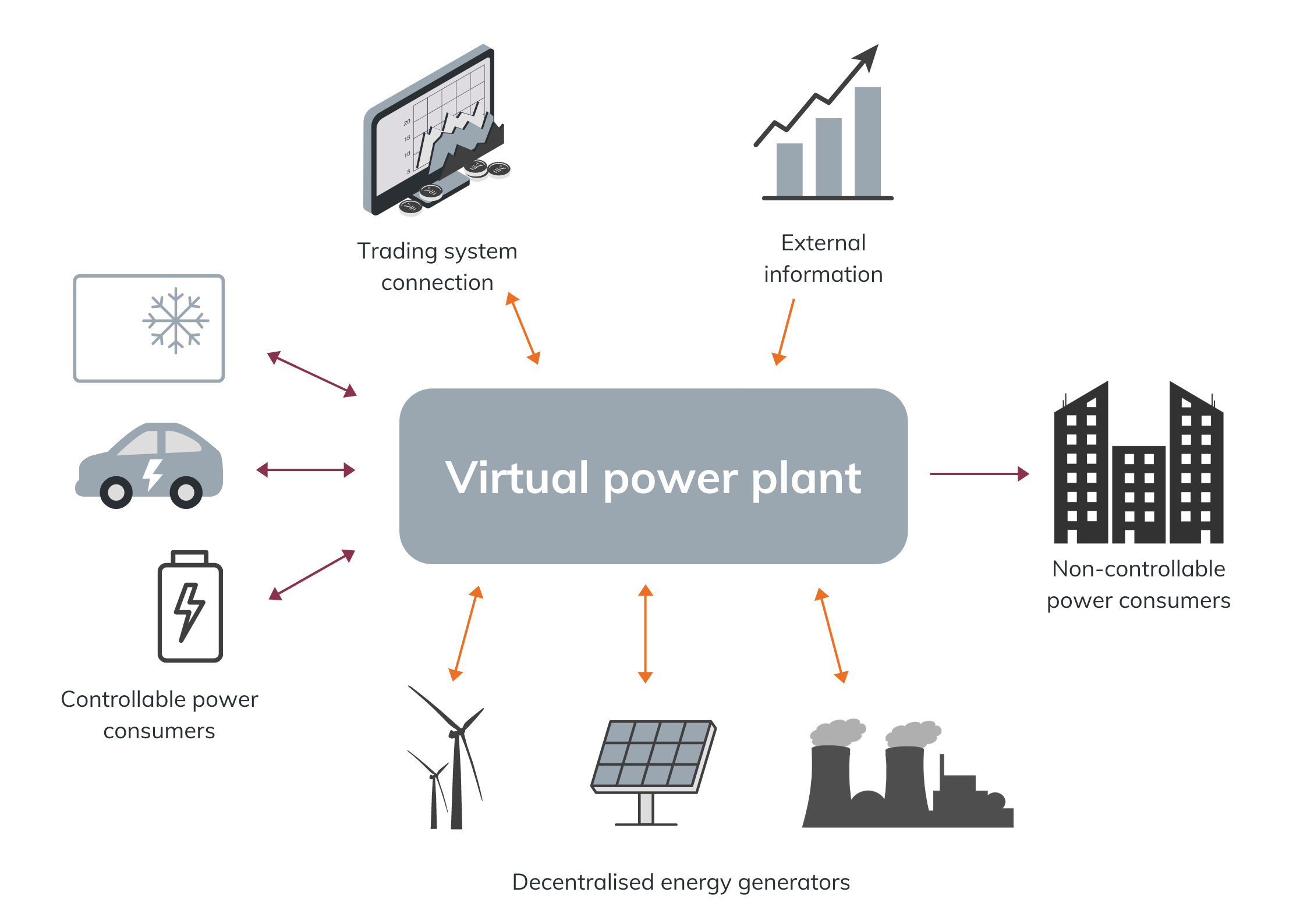 The VPP also takes in external information like market values, weather forecasts, planned outages and so on. Its algorithms can use this to predict renewable generation and learn when to turn up or down controllable consumption.

Below is a graph of the typical daily electricity demand for a commercial property:

The red line represents demand on the grid with no solar, the orange line with solar, and the blue line with solar and a battery. In each case, the property’s demand met is the same, but the import from the grid is markedly different.

Adding solar takes a big chunk out of the middle of the day, when the sun is brightest. The battery smoothes the peaks and troughs further, charging in the morning and discharging in the evening.

Overall this means the building’s demand on the grid is less intense and more stable.

In February, Texas was hit by a catastrophic storm, which knocked out nearly 50% of generation and significant portions of network infrastructure. Temperatures plummeted, freezing the gas production plants and pipelines the state depends on for electricity and heating - just as demand for power spiked. Other generators, including wind and coal, were also hit by cold extremes they weren’t designed to withstand. 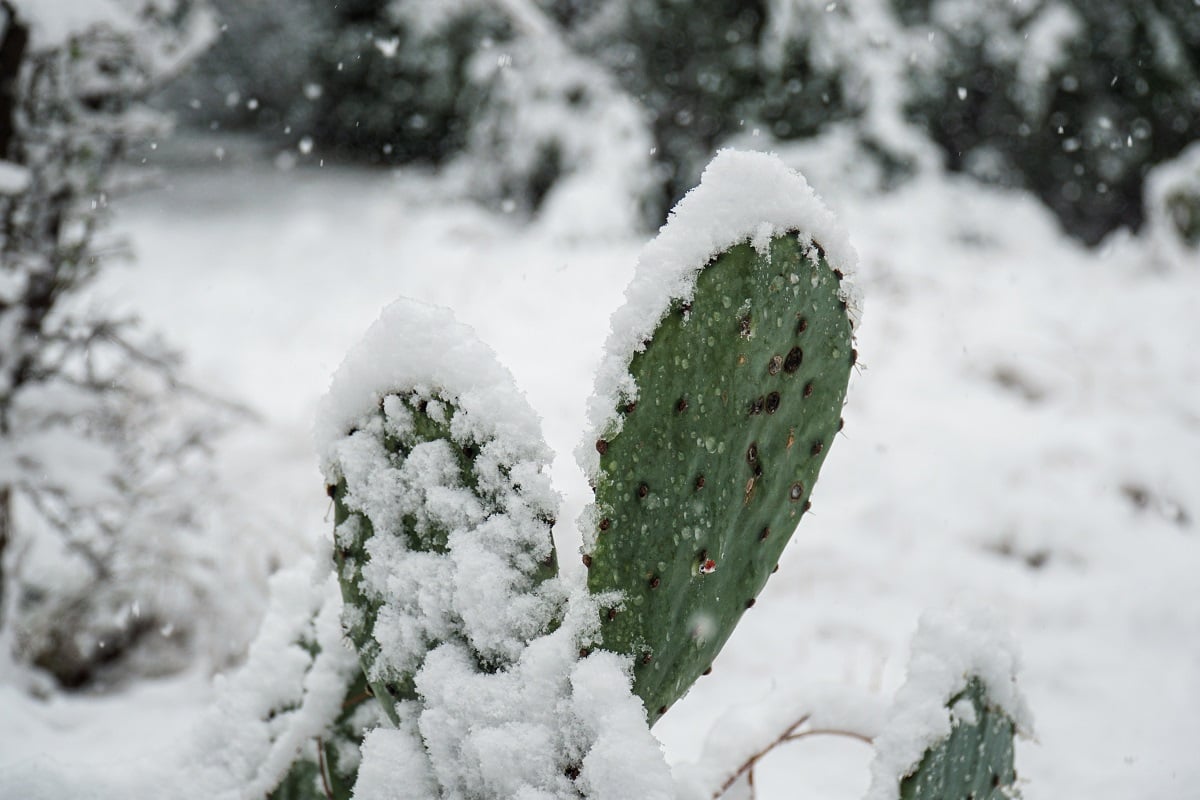 Extreme weather events like this will become more commonplace across the world due to climate change. A traditional grid with centralised generation and a large network of poles and wires is vulnerable - few points of failure can affect many customers.

Distributed energy generation and storage, on the other hand, can make properties energy secure in the event of network failure. The whole system becomes more flexible, resilient and cheaper to maintain.

“Flexible markets with sophisticated VPPs (virtual power plants) alongside additional clean generation and storage will ensure Texas does not get hit by this type of crisis again. These improvements will combine to make up the energy systems of the future that can withstand the impacts of the climate crisis. And, over time, as the size and flexibility of these systems grow, they will prevent major energy catastrophes like we saw in Texas.”

Tesla has partnered with Octopus Energy to offer the Tesla Energy Plan, for customers with solar PV and a Tesla Powerwall battery.

Participants join the Tesla Virtual Power Plant, and Tesla’s algorithm takes control of the battery to charge/discharge as it requires to help balance the grid. In exchange, customers benefit from low electricity import rates and matching high export rates for their solar power (so they are never left out of pocket).

For system owners, this can offer a source of income or bill reduction. For the network operators, it helps make the grid more secure, easier to maintain and fit for a decarbonised future.

We have installed thousands of solar and battery systems, which could be used as part of virtual power plants. To learn more about our process, download our free solar guide for contractors: